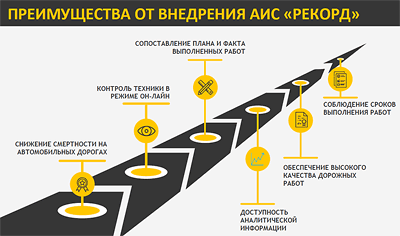 The Republic of Bashkortostan launched a national road digitalization program, implementing AIS Record, a ready-made replicable product designed by FORS Development Center. The system has already been used for the implementation of similar projects in other regions, including the Moscow region. The experience gained during its implementation was carefully studied in the Ministry of Digital Development of Public Administration of the Republic of Bashkortostan. The decision to implement such a system in said region was made basing on the research results. Thus, the activity of the Regional Management Center was automated on the basis of this software product.

"AIS Record, a ready-made solution developed of FORCE is perfect for us. The implementation of the system has already had a noticeable effect. All road sections were inventoried, all defects were registered, and an electronic passport was assigned to each road section. Now we finally know how many roads we have and how long they are. One of the most important tasks has been solved: now those who are in charge are personally responsible, and immediate response to complaints and reporting on their elimination in real time is available," says Dinar Sharafutdinov, Deputy Minister of Digital Development of the State Administration of the Republic of Bashkortostan.

Road builders started patching in February of this year, and by April 100% of the sink holes had been digitized. In just six months, we managed to repair 95% of the roadway, and the system already has 1,500 users.

The ready-made solution was adjusted in accordance with the specifics of the region (namely, large distances and complex terrain, as well as communication issues). Therefore, we created additional functionality that allows you to take the app to GooglePlay, as well as provides for background operation so you can receive messages in batches as soon as the network is back on. Moreover, documents can now be signed with enhanced encrypted and certified digital signatures, and a new module was created for monitoring work in the housing and utilities sector. The module provides for the management of courtyards, public areas, and municipal facilities. You can keep track of all the facilities and the progress of work for each one of them using a mobile app. Further on, we plan to add the control of outdoor lighting lines to eliminate emergency situations as soon as possible. All kinds of public territories, such as courtyards, parks, squares, playgrounds will be assigned e-passports, i.e. the entire urban space of the Republic will be digitized. This will make it easier to determine the actual volume of work in real time and justify the budgets for their execution.

It is planned to integrate the Gosuslugi public services portal with the new system, so that complaints and appeals of citizens are recorded in AIS Record the way it works in the Dobrodel or Active Citizen systems in the Russian Federation. The system will also help in implementing a number of national and regional programs, including Bashkir Courtyards, Safe & High-Quality Highways, My Street and others.